Today, 40% of all infertility cases may be associated with a male factor. As important as women, men contribute 50 of genetic material to future generations. That means babies are born with a half of the gene from the father and the other from the mother. So what will happen if “one half” incur problems?

The importance of genetic signals in reproduction

Among various abnormalities in male infertility, sperm DNA fragmentation is now the most common one. Sperm DNA fragmentation refers to the amount of damage seen in sperm DNA. Broken sperm DNA could lead to mistakes in genetic information, thus affecting to the embryo quality, reducing the conception rate, and increasing miscarriage rate and congenital malformation.

Sperm DNA fragmentation test has been widely applied and considered a basis for diagnosis of male infertility. However, there hasn’t been any specific method specialized for treatment of infertile patient with sperm DNA fragmentation. For these cases, sperm selection and ICSI technique are conducted in the same way with those of other infertility cases. To select and prepare sperm for IUI or IVF cycles, embryologists usually apply one of the following two methods:

– Density gradient centrifugation: Using two layers of filter medium with different silica levels (usually 45% and 90%) to select sperm. Seminal plasma, exotic cells and dead sperm are retained. Only viable sperm with good mobility can cross the separators to reach the bottom of the centrifugation tube. The embryologist will then assess the sperm morphology based on his own skills and knowledge to select a appropriate amount of sperm for ICSI.

– Swim-up: Like density gradient centrifugation, this method also helps the embryologist select sperm on the basis of their motility. Sperm are put into a tube consisting of suitable media. The tube was inclined at an angle of 45 °C in 45 minutes. Mobile sperm will swim-up and be collected. The embryologist evaluates their morphology to select sperm for ICSI. This method requires a sample with high concentration of motile sperm.

The two methods have been widely applied at assisted reproductive centers. However, the sperm selection is mostly based on sperm morphology while genetic factors are not concerned.

For male infertility cases with normal spermigram, no sperm containing DNA, or low level of sperm DNA fragmentation, Hong Ngoc IVF Center’s embryologists are applying both Gradient and Swim-up methods in the combination with the strict assess of sperm morphology following WHO-2010 standard, offering the highest success rate for ICSI.  However, genetic factors are considered more important in the following cases:

– Sperm aspirated by techniques such as PESA, TESE, MESA, and more.

For these special cases, Hong Ngoc IVF Center is the first and only center in Vietnam to use the world’s latest technique of sperm selection using Magnetic-Activated Cell Sorting (MACS) system. This technique helps remove all DNA fragmented sperm and only select sperm with normal genetic materials for ICSI. 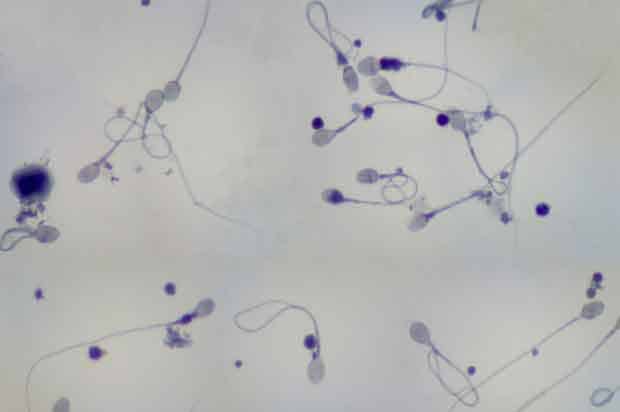 In human body, there is a miracle mechanism ensuring the genetic stability. When a cell is badly damaged, it automatically follows the pathway of apoptosis. Sperm is no exception. When the level of DNA fragmentation in sperm cells gets higher, apoptosis will be activated, leading to phosphatidylserine externalization. In apoptotic cells, phosphatidylserine (PS) antigen, that is normally restricted to the inner membrane layer, is externalized.

To detect these abnormal sperm cells, we add the marker attached to this antigen via microscopic particles. When passing through a magnetic separation column, the marked sperm cells are retained and discarded. Sperm without DNA fragmentation pass through the column and are collected for ICSI.

The sperm selection using MACS system is considered a turning point in treatment of male infertility, optimizing the success rate of IVF cycle.